The Rumble Ponies ended their series against the Sea Dogs this afternoon. Normally a spring sport, todays game felt more like a winter game.It seemed as though the weather changed with the inning, one minute sun shine, the next minute heavy snow showers. 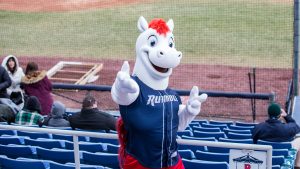 Out of the gate, it seemed as though the Sea Dogs were warmed up an ready to play. Cole Sturgeon lead off the game with a double, but that was all the offense the Sea Dogs could muster against Nabil Crismatt. After the lead off double, Crismatt settled in and threw 9 strike outs over the course of his six innings pitched.

Rumble Ponies offense got rolling in the second inning. Getting a runner across the plate after two singles, a sac fly and a grounder to second. Before the games conclusion, the Rumble Ponies added 3 more runs including a solo homer by John Mora. 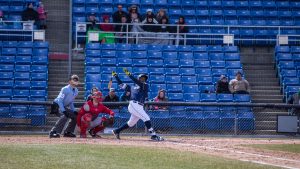 The Rumble Ponies bullpen gave the fans who braved the winter like conditions a scare late in the game. Giving up 3 runs in the 8th inning. Finally getting out of the inning and allowing Drew Smith to close out the game and get his first save of the season.

Although Tim Tebow was not on the roster for the game, he still took time to sign autographs and talk with fans.

For more information on the Binghamton Rumble Ponies, visit their website http://www.bingrp.com 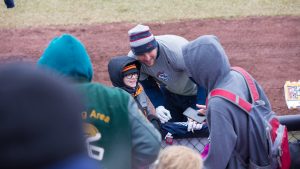